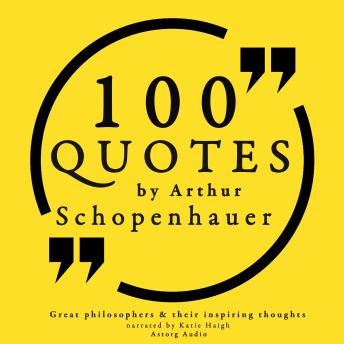 Download or Stream instantly more than 55,000 audiobooks.
Listen to "100 quotes by Arthur Schopenhauer" on your iOS and Android device.

Schopenhauer: here's when great philosophy can be somber, pessimistic, even brutal, and still resonate with a sarcastic laugh. He was among the first to contend that the universe is essentially not a rational place; in his most famous work, The World as Will and Representation, he argues that the individuals of a species do not have as much free will as is ordinarily thought, as the only Will that matters is that of the species, which is to reproduce and carry on. Schopenhauer is very well-known for his radical stance on women, aesthetics, and rhetoric; he is the author of The Art of Being Right, a playful manual designed to utterly crush one's opponent in verbal battle, and of the Metaphysics of the Love of the Sexes, a hilarious application of the theories developed in the World as Will and Representation. We have selected for you 100 of the most powerful quotes written by this somber and playful figure, for you to enjoy his scathing style, profound wisdom, and near-Eastern philosophy.