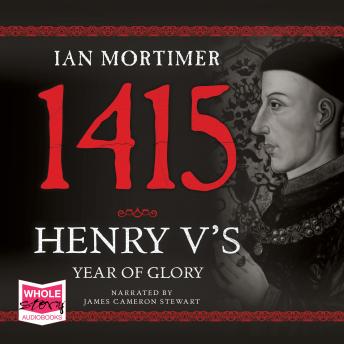 Download or Stream instantly more than 55,000 audiobooks.
Listen to "1415: Henry V's Year of Glory" on your iOS and Android device.

Henry V is regarded as the great English hero, lionised in his own day for his victory at Agincourt, his piety and his rigorous application of justice. But what was he really like? In this ground-breaking book, Ian Mortimer portrays Henry in the pivotal year of his reign. Recording the dramatic events of 1415, he offers the fullest, most precise and least romanticised view we have of Henry and what he did. At the centre of the narrative is the campaign which culminated in the battle of Agincourt: a slaughter ground intended not to advance England's interests directly but to demonstrate God's approval of Henry's royal authority on both sides of the Channel. The result is a fascinating reappraisal of Henry which brings to the fore many unpalatable truths, as well as the king's extraordinary courage and leadership qualities.