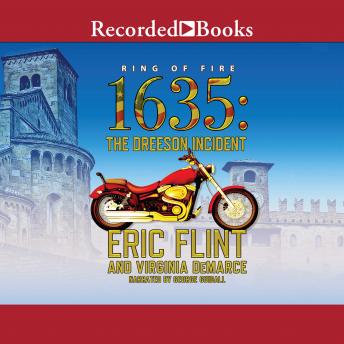 Download or Stream instantly more than 55,000 audiobooks.
Listen to "1635: The Dreeson Incident" on your iOS and Android device.

First Time in Paperback for This Exciting Installment in the New York Times Best-Selling Ring of Fire Series- The Most Popular and Best-Selling Alternate History Series. The Thirty Years War continues to ravage 17th century Europe, but a new force is gathering power and influence: the United States of Europe, a new nation led by Gustavus Adolphus, King of Sweden, and the West Virginians from the 20th century led by Mike Stearns who were hurled centuries into the past by a mysterious cosmic accident. While the old entrenched rulers and manipulators continue to plot against this new upstart nation, everyday life goes on in Grantville, the town lost in time, with librarians, firefighters, and garbage collectors trying to make do under unusual circumstances. And what better place for an undercover spy from France than working with the garbage collectors, examining 20th century machines that others throw out, and copying the technology (though he wishes one device-the paper shredder-had been left behind in the future). There are more sinister agents at work, however. One of them, Ducos, almost succeeded in assassinating the Pope, but his plan was ruined by quick action by a few Americans. Now, the would-be assassin not only has a score to settle, but has also decided on two excellent targets: Grantville's leader Mike Stearns and his wife Rebecca. . . .