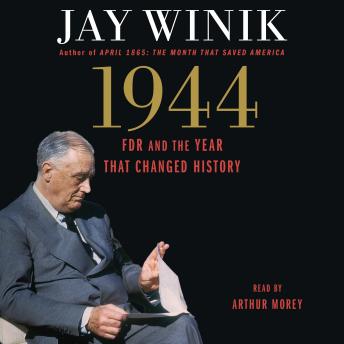 1944: FDR and the Year That Changed History

Download or Stream instantly more than 55,000 audiobooks.
Listen to "1944: FDR and the Year That Changed History" on your iOS and Android device.

Jay Winik brings to life in “gripping” detail (The New York Times Book Review) the year 1944, which determined the outcome of World War II and put more pressure than any other on an ailing yet determined President Roosevelt.

1944 was a year that could have stymied the Allies and cemented Hitler’s waning power. Instead, it saved those democracies—but with a fateful cost. Now, in a “complex history rendered with great color and sympathy” (Kirkus Reviews, starred review), Jay Winik captures the epic images and extraordinary history “with cinematic force” (Time).

1944 witnessed a series of titanic events: FDR at the pinnacle of his wartime leadership as well as his reelection, the unprecedented D-Day invasion, the liberation of Paris, and the tumultuous conferences that finally shaped the coming peace. But millions of lives were at stake as President Roosevelt learned about Hitler’s Final Solution. Just as the Allies were landing in Normandy, the Nazis were accelerating the killing of millions of European Jews. Winik shows how escalating pressures fell on an infirm Roosevelt, who faced a momentous decision. Was winning the war the best way to rescue the Jews? Or would it get in the way of defeating Hitler? In a year when even the most audacious undertakings were within the world’s reach, one challenge—saving Europe’s Jews—seemed to remain beyond Roosevelt’s grasp.

“Compelling….This dramatic account highlights what too often has been glossed over—that as nobly as the Greatest Generation fought under FDR’s command, America could well have done more to thwart Nazi aggression” (The Boston Globe). Destined to take its place as one of the great works of World War II, 1944 is the first book to retell these events with moral clarity and a moving appreciation of the extraordinary actions of many extraordinary leaders.