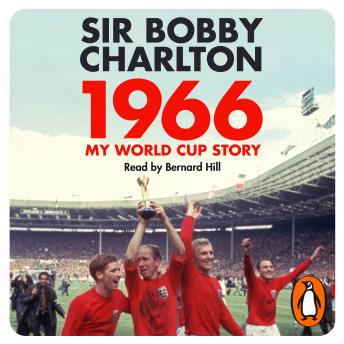 Download or Stream instantly more than 55,000 audiobooks.
Listen to "1966: My World Cup Story" on your iOS and Android device.

In 1966 England won the World Cup at Wembley. Sir Bobby Charlton, England’s greatest ever player, was there on the pitch. Now, fifty years on, Sir Bobby looks back on the most glorious moment of his life and England's greatest sporting achievement.

In 1966 he takes us through the build-up to the tournament and to the final itself, describing what he saw, what he heard, and what he felt. He explains what it was like to be part of Sir Alf Ramsey’s team, gives us his personal memories of his teammates, the matches, the atmosphere; the emotion of being carried on the wave of a nation’s euphoria and how it felt to go toe-to-toe with some of the foremost footballers to ever play the game. He reveals what it means to be forever defined by one moment; how a life fully lived can come back to one single instance, one day when a man stands side-by-side with his best friends united in a single aim, in front of a watching nation.