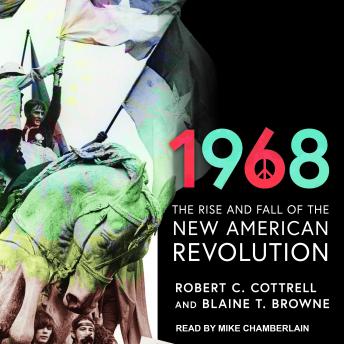 1968: The Rise and Fall of the New American Revolution

Download or Stream instantly more than 55,000 audiobooks.
Listen to "1968: The Rise and Fall of the New American Revolution" on your iOS and Android device.

The year 1968 retains its mythic hold on the imagination in America and around the world. Like the revolutionary years 1789, 1848, 1871, 1917, and 1989, it is recalled most of all as a year when revolution beckoned or threatened. On the fiftieth anniversary of that tumultuous year, cultural historians Robert Cottrell and Blaine T. Browne provide a well-informed, up-to-date synthesis of the events that rocked the world, emphasizing the revolutionary possibilities more fully than previous books.

For a time, it seemed as if anything were possible, that utopian visions could be borne out in the political, cultural, racial, or gender spheres. It was the year of the Tet Offensive, the Resistance, the Ultra-Resistance, the New Politics, Chavez and RFK breaking bread, LBJ's withdrawal, student revolt, barricades in Paris, the Prague Spring, SDS' sharp turn leftward, communes, the American Indian Movement, the Beatles' 'Revolution,' the Stones' 'Street Fighting Man,' The Population Bomb, protest at the Miss America pageant, and Black Power at the Mexico City Olympics.

For those listeners reliving 1968 or exploring it for the first time, Cottrell and Browne serve as insightful guides, weaving the events together into a powerful narrative of an America and a world on the brink.