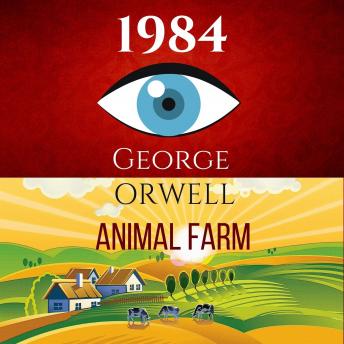 Download or Stream instantly more than 55,000 audiobooks.
Listen to "1984 & Animal Farm (2In1): The International Best-Selling Classics" on your iOS and Android device.

Bringing the Best of George Orwell's 1984 & Animal Farm Together.

Nineteen Eighty-Four: A Novel, often published as 1984, is a dystopian novel.A startling and haunting novel, 1984 creates an imaginary world that is completely convincing from start to finish. No one can deny the novel's hold on the imaginations of whole generations, or the power of its admonitions-a power that seems to grow, not lessen, with the passage of time.

George Orwell's timeless and timely allegorical novel-a scathing satire on a downtrodden society's blind march towards totalitarianism.The book tells the story of a group of farm animals who rebel against their human farmer, hoping to create a society where the animals can be equal, free, and happy. Ultimately, however, the rebellion is betrayed, and the farm ends up in a state as bad as it was before, under the dictatorship of a pig named Napoleon. Today it is devastatingly clear that wherever and whenever freedom is attacked, under whatever banner, the cutting clarity and savage comedy of George Orwell's masterpiece have a meaning and message still ferociously fresh.