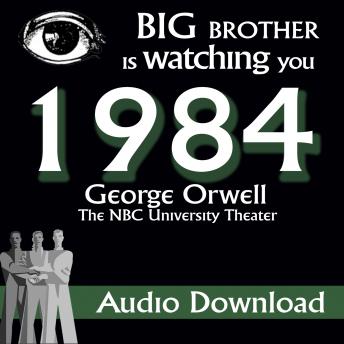 Download or Stream instantly more than 55,000 audiobooks.
Listen to "1984 (Dramatized)" on your iOS and Android device.

War Is Peace! Freedom Is Slavery! Ignorance Is Strength! Big Brother is watching and listening. Yep, we're talking propaganda, the fabrication of "truth", the outlawing of dissent, the distortion of reality, endless war... and of course, thought crime. No we're not talking about the goings on on 2011, were talking about the 1949 NBC University Theater's adaptation of George Orwell's 1984. This production originally aired on August 27, 1949, but is available today for your listening enjoyment. This is the very first adaptation of 1984 and it stars David Niven!