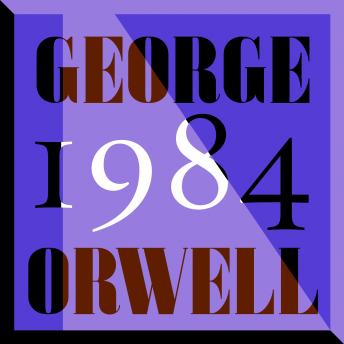 Download or Stream instantly more than 55,000 audiobooks.
Listen to "1984" on your iOS and Android device.

'Thoughtcrime was not a thing that could be concealed for ever. You might dodge successfully for a while, even for years, but sooner or later they were bound to get you.'

Winston Smith works in the Ministry of Truth — or Minitrue as it is called in Newspeak — altering newspapers and reports to follow the arbitrary dictates of Big Brother’s propaganda. Beneath his outward conformity, Winston dreams of sharing his treasonable thoughts, breaking ’the locked loneliness in which one had to live’. And so he takes his first dangerous steps — writing a diary of his doubts and then falling in love with a woman of the Party, the beautiful and brave Julia. They know their love is doomed, but Julia swears ’They can make you say anything — anything — but they can’t make you believe it. They can’t get inside you.’ In Oceania, however, there is no possibility of solidarity, rebellion or love, and the Party can get anywhere.

George Orwell’s Nineteen Eighty-Four was first published in 1949. This terrifying dystopia, which he created in a time of great social and political unrest, remains acutely relevant and influential to this day.