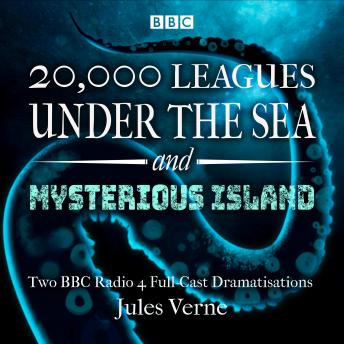 Download or Stream instantly more than 55,000 audiobooks.
Listen to "20,000 Leagues Under the Sea & The Mysterious Island: Two BBC Radio 4 full-cast dramatisations" on your iOS and Android device.

In 20,000 Leagues Under the Sea, Marine scientist Professor Aronnax and his stowaway daughter Connie join whaler Ned Land aboard the USS Abraham Lincoln to hunt an aggressive sea monster, believed to be a giant narwhale. When they engage the monster, they find to their astonish­ment it's an electrically-powered submarine, the Nautilus, techno­logically far superior to any vessel known. They are rescued by the ship's enigmatic captain, Nemo...

In The Mysterious Island, military engineer Cyrus Smith, his freed slave Neb, and reporter Grace Spilett - flee the besieged city of Richmond in a balloon. Their vessel is caught in a vast storm and blown thousands of miles until it crashes on a remote Pacific island. But they soon realise that they are not alone on the island...