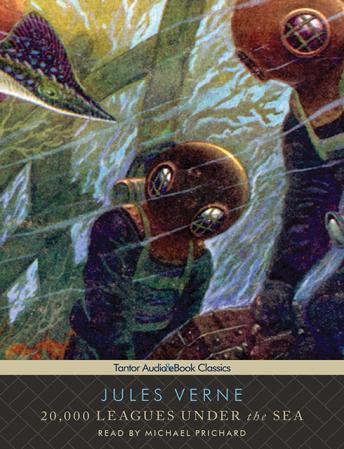 Download or Stream instantly more than 55,000 audiobooks.
Listen to "20,000 Leagues Under the Sea" on your iOS and Android device.

French professor Pierre Aronnax and his servant join the Abraham Lincoln, an American frigate, on a mission to find and destroy a 'sea-unicorn of colossal dimensions, armed not with a halberd, but with a real spur, as the armored frigates.' The undersea monster is thought to be responsible for the disappearance of over 200 ships. When they encounter the 'gigantic cetacean,' it disables the Abraham Lincoln and knocks Professor Aronnax, his servant, and the hot-tempered harpooner Ned Land overboard. The three must cling to the beast or drown; however, they soon realize that the 'beast' is really a man-made underwater vehicle.

Captain Nemo captures the men and holds them prisoner on the Nautilus, his incredible submarine. The captain and his unwilling passengers thus embark on a deep-sea odyssey that stretches from the palm-strewn Indian Ocean to the frozen peril of the South Pole. But the enigmatic Nemo has a darker purpose for his voyage: revenge on humanity.

Not just a suspense-ridden drama, this classic novel, written in 1873, predicts with astonishing accuracy the advanced technology and inventions of the twentieth century, and it has inspired generations of science fiction writers.