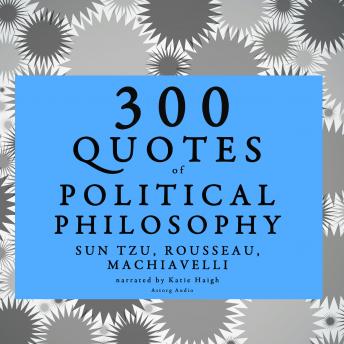 Download or Stream instantly more than 55,000 audiobooks.
Listen to "300 quotes of Political philosophy with Rousseau, Sun Tzu & Machiavelli" on your iOS and Android device.

Become familiar with the most important political philosophers, Jean-Jacques Rousseau, Sun Tzu, author of the Art of War, and Machiavelli, author of the devilish The Prince. Delve deep into their works and thoughts with a selection of the essential quotes introducing their major ideas and delineating the structure of their work with clarity.