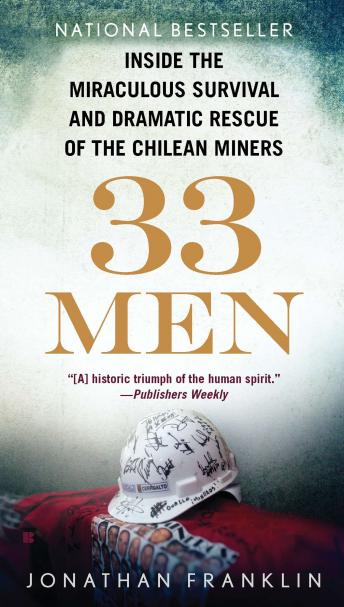 33 Men: Inside the Miraculous Survival and Dramatic Rescue of the Chilean Miners

Download or Stream instantly more than 55,000 audiobooks.
Listen to "33 Men: Inside the Miraculous Survival and Dramatic Rescue of the Chilean Miners" on your iOS and Android device.

Having had unparalleled access to the Chilean mine disaster, award-winning journalist Jonathan Franklin takes readers to the heart of a remarkable story of human endurance, survival, and historic heroism.33 Men is the groundbreaking, authoritative account of the Chilean mine disaster, one of the longest human entrapments in history. Rushing to the scene when the miners were discovered, Franklin obtained a coveted 'Rescue Team' pass and reported directly from the front lines of the rescue operation, beyond police controls, for six weeks.Based on more than 110 intimate interviews with the miners, their families, and the rescue team, Franklin's narrative captures the remarkable story of these men and women, in details shocking, beautiful, comedic, and heroic. Gripping and raw with never-before-revealed details, 33 Men is a true story that reads like a thriller.