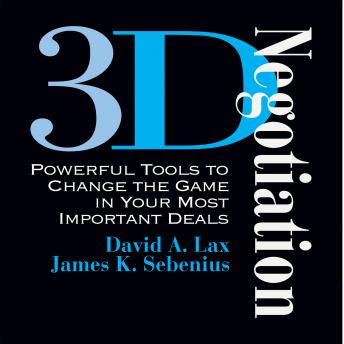 3-D Negotiation: Powerful Tools for Changing the Game in Your Most Important Deals

Download or Stream instantly more than 55,000 audiobooks.
Listen to "3-D Negotiation: Powerful Tools for Changing the Game in Your Most Important Deals" on your iOS and Android device.

Stuck in a 'win-win versus win-lose' mind-set, most negotiators focus on the face-to-face process at the table. In 3-D Negotiation, David Lax and James Sebenius urge bargainers to look beyond tactics at the table. Persuasive tactics are only the 'first dimension' of the authors' path-breaking approach, developed from their decades of doing deals and analyzing great dealmakers. Through moves in the 'second dimension', deal design, 3-D negotiators know how to unlock economic and noneconomic value by systematically envisioning and creatively structuring agreements.

But what really sets the 3-D approach apart, is its 'third dimension', is setup. Before showing up at a bargaining session, 3-D negotiators 'set the table' by arranging the most promising possible situation - laying the groundwork for adroit tactical interplay later. Acting away from the table, the bargainers ensure that the right parties have been approached in the right sequence, to deal with the right issues, engaging the right set of interests, at the right table, at the right time, under the right expectations, and facing the right no-deal options. This new arsenal of moves away from the table often exerts the greatest impact on the negotiated outcome.

Packed with practical steps and engaging examples, 3-D Negotiation enables you to reach remarkable agreements once you arrive at the table - deals that would be unattainable by standard tactics, no matter how skilful.