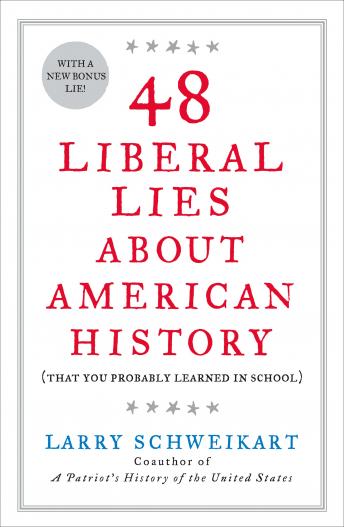 48 Liberal Lies About American History: (That You Probably Learned in School)

Download or Stream instantly more than 55,000 audiobooks.
Listen to "48 Liberal Lies About American History: (That You Probably Learned in School)" on your iOS and Android device.

In this follow-up to the best-selling A Patriotâ€™s History of the United States, Professor Larry Schweikart once again challenges liberal historians and their shameful attempts to distort our countryâ€™s legacy. This time he takes on authors of popular textbooks who, in an effort to be politically correct, tarnish Americaâ€™s image in the eyes of our high school and college students.

The problem isnâ€™t that liberal authors present their opinions or interpretations of history from an obvious left-wing bias. The problem is authors who actually distort facts and manipulate data in an effort to appear objective and unbiased while furthering their leftist objectives.

Students learn, for example, that the Founding Fathers were elitists who drafted the Constitution in order to protect their own economic interests. . . .That Lincoln issued the Emancipation Proclamation only because he needed black soldiers. . . .That racist groups such as the KKK represented our society in the early twentieth century. . . .That the failures of capitalism caused the Great Depression. All false, as readers will discover.