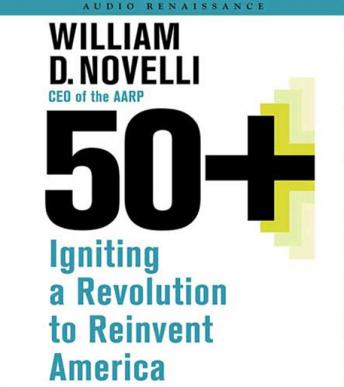 50+: Igniting a Revolution to Reinvent America

Download or Stream instantly more than 55,000 audiobooks.
Listen to "50+: Igniting a Revolution to Reinvent America" on your iOS and Android device.

Bill Novelli doesn't believe that retirement has to mean rocking one's way into the sunset. As the head of the strongest organization of retired people in the world, the AARP, Novelli believes that retirement can be a time of action and influence rather than one of illness and decline.
In this inspiring book, Bill Novelli will speak to the growing number of Americans age 50 and older about what they can do to shape the national debate about aging and influence government policy towards retirees. For a long time, many of the government forces in Washington have hoped to divide the nation along various lines and one of those dividing lines is age. Against this 'divide and conquer' mentality, Novelli will argue that the common, shared experience of aging will serve not to divide the US, but to unite it. And the united tide of change is potentially enormous: When the Baby Boomer generation ages to the 50- year mark, they will create the largest group of retirees in the history of the country, solidifying a powerful constituency for major change in ways beneficial to the entire nation.
Novelli believes that this group is capable of just about anything. 50+ is a rallying cry for an aging America by a man who knows how to get the job done.