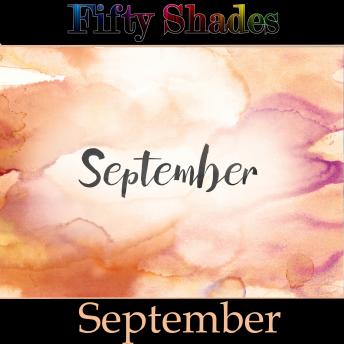 Download or Stream instantly more than 55,000 audiobooks.
Listen to "50 Shades of September" on your iOS and Android device.

The Land of the Free, the Home of the Brave. This illustrious phrase encapsulates the aspirations of America and its people. In this volume we feature 50 American poets beginning with the Colonist Anne Bradstreet in the 17th century, when American poetry was entirely rooted in its parental British forms. From here our classic poets take us through Centuries of history, through Independence and expansion Westward, across the cities and vast landscapes of their words. Along the journey we also meet the Imagists, the poets from the Harlem Renaissance by way of the Transcendentalists and the Fireside Poets. The giants of the poetic way loom large; Walt Whitman. Emily Dickinson, Edgar Allan Poe, Paul Laurence Dunbar and Edna St Vincent Millay. Our rambling poetic stroll gives voice to the nation's hopes, its dreams, its failings, its musings. We cannot hope to define America but we do provide the many changing moods and flavours of the times as we discover the essence of its soul.1 - Fifty Shades of September - An Introduction2 - September by George Arnold3 - September by Helen Hunt Jackson4 - September 1st 1802 By William Wordsworth5 - Lines Written Beneath an Elm in the Churchyard of Harrow-on-the-Hill September 2nd 1807 by Lord Byron6 - Sonnet XXL, Sacred to the Memory of Edward Spedding Who Died September 3rd 1832 by Henry Alford7 - An Indian Summer Day on the Prairie by Vachel Lindsay8 - Lines Written on the 6th September by Thomas Gent9 - Autumn in Sussex by Radclyffe Hall10 - Autumn in Cornwall by Algernon Charles Swinburne11 - Written in London September 1802 by William Wordsworth12 - Autumn by Kahlil Gibran13 - September by Carlos Wilcox14 - A Calendar of Sonnets - September by Helen Hunt Jackson15 - September by John Payne16 - The Name of it is Autumn by Emily Dickinson17 - September 1815 by William Wordsworth18 - Autumn Song by Dante Gabriel Rosetti19 - Autumn Dawn by Charles Sorley20 - An Autumn Sunset by Edith Wharton21 - A September Night by George Marion McClellan22 - In Autumn Moonlight by Robert Seymour Bridges23 - Indian Summer by Henry Van Dyke24 - September 1819 by William Wordsworth25 - The Autumn by Elizabeth Barrett Browning26 - Autumn by Thomas Hood27 - Elegy in April and September by Wilfred Owen28 - September 1918 by Amy Lowell29 - 21st September, 1870 by Charles Kingsley30 - An Autumn Rain Scene by Thomas Hardy31 - Sonnet. September 1922 by Ivor Gurney32 - September by Janet Hamilton33 - In September by Thomas MacDonagh34 - Autumn Overlooked My Knitting by Emily Dickinson35 - The Golden Wedding of Sterling and Sarah Lanier September 27th, 1868 by Sidney Lanier36 - To Autumn by William Blake37 - Written in September 1804 by Christian Milne38 - Autumn by Anne Bradstreet39 - Ode to Autumn by John Keats40 - Ode to the West Wind by Percy Bysshe Shelley41 - Autumn - A Dirge by Percy Bysshe Shelley42 - In September by Amy Levy43 - Postscriptum, September 1913 by Thomas MacDonagh44 - Hold the Harvest by Fanny Parnell45 - September Midnights by Sara Teasdale46 - September 1913 by William Butler Yeats47 - Late September by Amy Lowell48 - Love's Harvest by Alfred Austin49 - Autumn by Henry Wadsworth Longfellow50 - A Carol of Harvest for 1867 by Walt Whitman51 - September Dark by James Whitcomb Riley