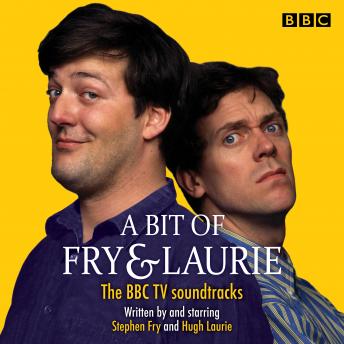 A Bit of Fry & Laurie: The BBC TV soundtracks

Download or Stream instantly more than 55,000 audiobooks.
Listen to "A Bit of Fry & Laurie: The BBC TV soundtracks" on your iOS and Android device.

In this classic TV soundtrack, Stephen Fry and Hugh Laurie explore a seemingly inexhaustible list of subjects with a delicious turn of phrase and elaborate wordplay.

The hilarity includes regular acts such as not so super spy Tony Mercheson and his boss Control, yuppies, John and Peter and the Critics.

With four brilliant series of great satire, comic genius and hilarious use of language, the show cemented Fry & Laurie as a double act and paved the way for their future stardom.

Please note that this audio originated as TV soundtracks and contains occasional visual jokes
Minor edits have been made to the original broadcast for ease of listening.
Contains strong language