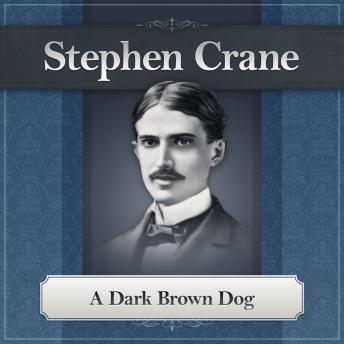 Download or Stream instantly more than 55,000 audiobooks.
Listen to "A Dark Brown Dog: A Stephen Crane Story" on your iOS and Android device.

"A Dark Brown Dog" is an unexpected Stephen Crane jewel. Crane is best known for three short stories, "The Open Boat", thought by many to be the best short story ever written; "The Blue Hotel"; and "The Bride Comes to Yellow Sky". Simply has recorded over 10 more stories that deserve to be right up there with the top three. As Simply says, this is not an NFL Power ranking, or a compare and contrast assignment. This is your opportunity to enjoy many of Crane's other illuminating and moving works.
"A Dark Brown Dog" is the first cousin of Maggie: A Girl of the Streets, in being set in the rough, tough world of the New York Bowery of the late 19th century. The boy meets the dog and abuses his warmth and openness, the dog-like devotion so common to many dogs. Later one meets the father from whom the boy has picked up the anger and abusive behavior. However, the boy is not quite there yet and adopts the dog for his own; one feels this is the turning point in his life, and certainly will likely be the most memorable. They boy's hope, as with Maggie, was dashed by an abusive parent. The dog is thrown out of the house by an abusive parent much like Maggie was. The results are similar. Both die. Crane not only writes the story but paints the canvas on which it occurs. A remarkable under-appreciated effort by Mr. Crane.