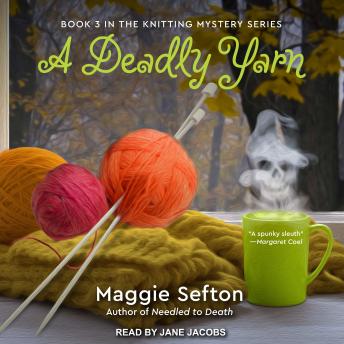 Download or Stream instantly more than 55,000 audiobooks.
Listen to "A Deadly Yarn" on your iOS and Android device.

Kelly and Megan could not be happier for their friend Allison Dubois-a young, talented, up-and-coming artist. Invited by a designer to join her New York studio, Allison is about to embark on a new life. But when Kelly and Megan arrive at Allison's apartment to drive her to the airport, they find her dead on the floor, apparently from an overdose of sleeping pills. The police suspect suicide, but Kelly and Megan aren't convinced.

Soon Kelly discovers that while Allison's career was on the fast-track, her social life was a mess. A bad news boyfriend, a jealous design student, and a mysterious man named Brian are all prime suspects in Kelly's book. Now it's up to Kelly and her crafty friends from the House of Lambspun to unravel this tightly stitched puzzle . . .