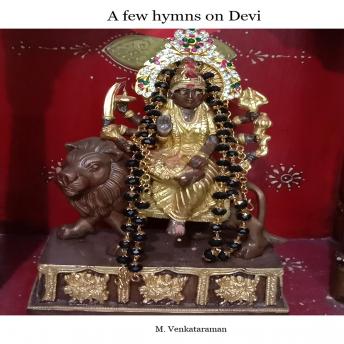 A few hymns on Devi

Download or Stream instantly more than 55,000 audiobooks.
Listen to "A few hymns on Devi" on your iOS and Android device.

Devi is the Great Goddess of Hinduism. Devī is the Sanskrit word for ‘goddess’. She is revered in a variety of forms. She is the Divine Female, revered by all as a mother. Hence she is known as the Mother Goddess.

The Mother Goddess is India's supreme Divinity. She assumes cosmic proportions, destroying evil. In some forms she is benign and gentle and in other forms she is ferocious and dynamic. As a cosmic force of Durga or Kali she destroys the demonical forces that threaten world equilibrium. In her gentle form she bestows wealth, fortune, and success. The Puranas and other poetic verses composed by sages and saints praise the Mother-goddess in various forms of hymns and give a detailed account of her glory and powers.

The subject matter of these hymns are generally petitions to the deity like pardoning of sins committed knowingly or unknowingly, removal of problems and difficulties in life, grant of the good things of life, desire for obtaining knowledge etc. Or it may be on some lofty ideals, or sublime heights of philosophy or mystical experience. They are generally called as ‘Stotram’. These hymns are thus generally simple poems expressing praise and personal devotion of a deity. People generally recite these hymns for getting relief from the problems of daily life and for obtaining peace and tranquillity.

A brief idea about nine such hymns on the Devi have been narrated along with their recitation in this audio book.