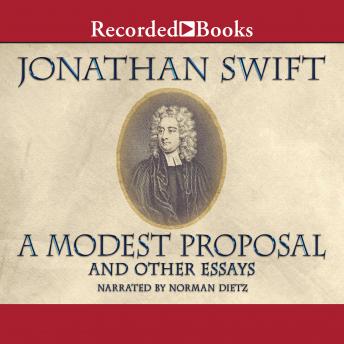 A Modest Proposal and Other Writings

Download or Stream instantly more than 55,000 audiobooks.
Listen to "A Modest Proposal and Other Writings" on your iOS and Android device.

In 'A Modest Proposal,' first published in 1729, Jonathan Swift heaps scorn on then-current political theory and reveals the appalling suffering taking place in Ireland - not through direct reporting, but through mock suggestions on what to do with the poor; they should sell their children for food. 'The chief end I propose to myself in all my labors is to vex the world rather than divert it,' wrote Jonathan Swift in a letter to his friend Alexander Pope. Other vexing works collected here are 'Directions to Servants,' 'The Art of Political Lying,' 'A Digression Concerning the Critics,' and 'Sweetness and Light.'