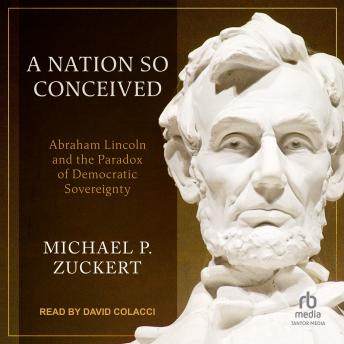 A Nation So Conceived: Abraham Lincoln and the Paradox of Democratic Sovereignty

Download or Stream instantly more than 55,000 audiobooks.
Listen to "A Nation So Conceived: Abraham Lincoln and the Paradox of Democratic Sovereignty" on your iOS and Android device.

The culmination of years of work on Abraham Lincoln's political thought, Michael Zuckert's A Nation So Conceived argues for a coherent center to Lincoln's political ideology. Zuckert provides invaluable guidance to understanding both Lincoln and the politics of the United States between 1845 and Lincoln's death in 1865 by focusing on roughly a dozen speeches that Lincoln made during his career. This listener-friendly chronological organization is motivated by Zuckert's emphasis on Lincoln as a practical politician who was always fully aware of the political context of the moment.

According to Lincoln's speech at Gettysburg, America was new precisely because it was born in dedication to the first premise of the theory of democratic sovereignty: that all men are created equal. Lincoln's thought consisted in an ever-deepening meditation on the grounds and implications of that proposition, both in its constructive and in its destructive potential.

A Nation So Conceived is devoted to exploring the paradoxical duality of 'created equal.' In a nearly comprehensive study of Lincoln's thought, Zuckert uses lessons he learned from decades of teaching to reveal how Lincoln understood both its truth and its pathological consequences while offering an assessment of his aims and achievements as a statesman.