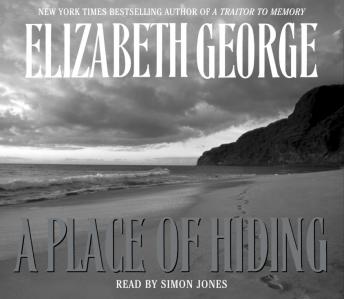 A Place of Hiding

Download or Stream instantly more than 55,000 audiobooks.
Listen to "A Place of Hiding" on your iOS and Android device.

An isolated beach on the island of Guernsey in the English Channel is the scene of the murder of Guy Brouard, one of Guernsey’s wealthiest inhabitants and its main benefactor. Forced as a child to flee the Nazis in Paris, Brouard was engaged in his latest project when he died: a museum in honor of those who resisted the German occupation of the island during World War II.

It is from this period of time that his murderer may well have come. But there are others on Guernsey with reason to want Guy Brouard dead: his wives, his business associates, his current mistress, the underprivileged teenagers he mentored—any of whom might have harbored a secret motive for murder. As family and friends gather for the reading of the will, Deborah and Simon St. James find that seemingly everyone on the history-haunted island has something to hide. And behind all the lies and alibis, a killer is lurking. In order to bring this person to justice, the St. James must delve into Guernsey’s dark history—both past and present—and into the troubled psyche of someone who may have exacted retribution for the most unspeakable crime of all.

In A Place of Hiding, bestselling novelist Elizabeth George marks new territory in the darker landscapes of human relationships. She tells a gripping, suspenseful story of betrayal and devotion, war and remembrance, love and loss...and the higher truths to which we must all ultimately answer.