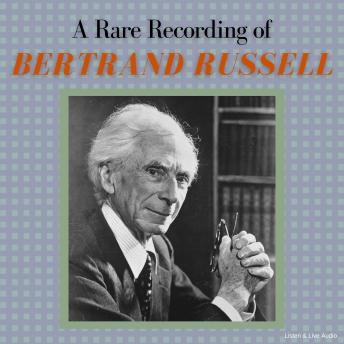 A Rare Recording of Bertrand Russell

Download or Stream instantly more than 55,000 audiobooks.
Listen to "A Rare Recording of Bertrand Russell" on your iOS and Android device.

Bertrand Russell (May 18, 1872 - February 2, 1970) was born in Monmouthshire, into one of the most prominent aristocratic families in Britain. Russell was a philosopher, logician, mathematician, historian, prominent anti-war activist, and an outspoken opponent of nuclear weapons. In 1950, Russell was awarded the Nobel Prize in Literature. The following is a 1959 speech on nuclear disarmament.