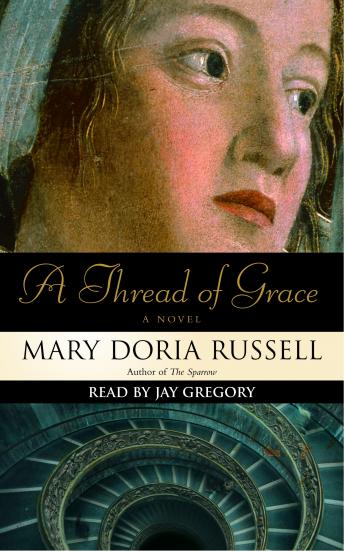 A Thread of Grace: A Novel

Download or Stream instantly more than 55,000 audiobooks.
Listen to "A Thread of Grace: A Novel" on your iOS and Android device.

It is September 8, 1943, and fourteen-year-old Claudette Blum and her father are among the thousands of Jewish refugees scrambling over the Alps toward Italy, where they hope to find safety now that the Italians have broken from Germany and made a separate peace with the Allies. The Blums will soon discover that Italy is anything but peaceful, as it quickly becomes an open battleground for the Nazis, the Allies, Resistance fighters, Jews in hiding, and ordinary Italian civilians trying to survive.

Tracing the lives of a handful of fascinating characters—a charismatic Italian Resistance leader, a priest, an Italian rabbi’s family, a disillusioned German doctor—Mary Doria Russell tells the little-known story of the vast underground effort by Italian citizens who saved the lives of 43,000 Jews during the final phase of World War II. A Thread of Grace puts a human face on history.

Praise for A Thread of Grace

“An addictive page-turner . . . [Mary Doria] Russell has an astonishing story to tell—full of action, paced like a rapid-fire thriller, in tense, vivid scenes that move with cinematic verve.”—The Washington Post Book World

“Rich . . . Based on the heroism of ordinary people, [A Thread of Grace] packs an emotional punch.”—People

“[A] deeply felt and compellingly written book . . . The progress of each character’s life is marked or measured by acts of grace. . . . Russell is a smart, passionate and imaginative writer.”—Cleveland Plain Dealer

“A feat of storytelling . . . an important book [that] needs to be widely read.”—Portland Oregonian

“Mary Doria Russell’s fans (and aren’t we all?) will rejoice to see her new novel on the shelves. A Thread of Grace is as ambitious, beautiful, tense, and transforming as any of us could have hoped.”—Karen Joy Fowler, author of The Jane Austen Book Club

“A story of love and war, A Thread of Grace speaks to the resilience and beauty of the human spirit in the midst of unimaginable horror. It is, unquestionably, a literary triumph.”—David Morrell, author of The Brotherhood of the Rose and First Blood