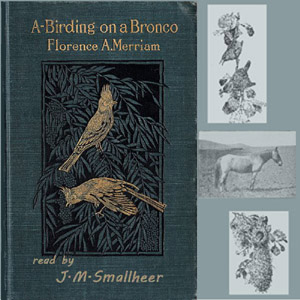 Download or Stream instantly more than 55,000 audiobooks.
Listen to "A-Birding on a Bronco" on your iOS and Android device.

Florence Augusta Merriam Bailey was an American ornithologist and nature writer. She started observing bird behavior at a time when most bird study was based on collections and skins. By 1885, she began to write articles focusing on protecting birds. Her introduction of a birdwatching field guide, aimed at living birds, is considered the first in the tradition of modern bird guides. She wrote the first of these at the age of 26, initially as a series of notes in the Audubon Magazine and later as books. In "A-Birding on a Bronco," she writes an engaging memoir about her several trips to study birds on a ranch in California in the late 1800's.