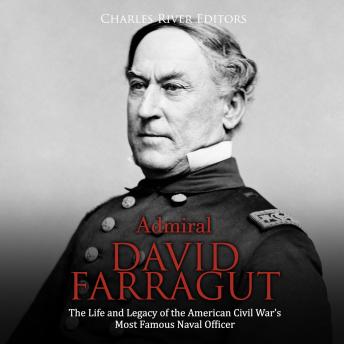 Admiral David Farragut: The Life and Legacy of the American Civil War’s Most Famous Naval Officer

Download or Stream instantly more than 55,000 audiobooks.
Listen to "Admiral David Farragut: The Life and Legacy of the American Civil War’s Most Famous Naval Officer" on your iOS and Android device.

Americans have long been fascinated by the Civil War, marveling at the size of the battles, the leadership of the generals, and the courage of the soldiers. Since the war's start over 150 years ago, the battles have been subjected to endless debate among historians and the generals themselves. The Civil War was the deadliest conflict in American history, and had the two sides realized it would take 4 years and inflict over a million casualties, it might not have been fought. Since it did, however, historians and history buffs alike have been studying and analyzing the biggest battles ever since.

After the first year of the Civil War, the Confederacy was faced with a serious problem. While the South had enjoyed some stunning victories on land, they had been all but cut off from the world at sea. The more industrialized North had realized that in case of an extended war, the best way to defeat the Confederacy was to starve it of supplies. The rebels started the war with no real navy to speak of, and so the federal government quickly set up a blockade of all Southern ports and river mouths. By depriving the South of revenues derived from its main export, cotton, the North seriously injured the Southern economy.

Meanwhile, the North managed to have spectacular success jointly coordinating operations between the Army and Navy, thanks in large measure to the leadership of officers like David Farragut. While generals like Ulysses S. Grant and William Tecumseh Sherman received the lion’s share of the credit for Union victories, especially in the Western Theater, naval forces were instrumental in the capture of New Orleans and Vicksburg, as well as at Fort Donelson and Fort Henry, and Farragut was immediately recognized for his service. Congress made him the nation’s first Rear Admiral in history in 1862, and Farragut would also go on to become the first man in the history of the U.S. Navy to attain the rank of Admiral.