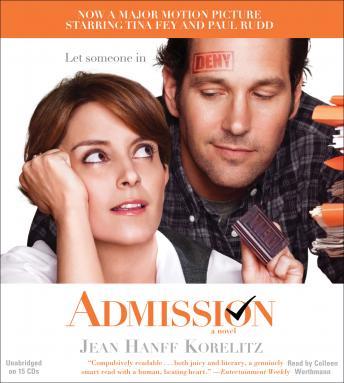 Download or Stream instantly more than 55,000 audiobooks.
Listen to "Admission" on your iOS and Android device.

From the New York Times bestselling author of You Should Have Known (adapted as "The Undoing" on HBO) comes another page-turning masterpiece, this time on college admissions—now a major motion picture starring Tina Fey and Paul Rudd.

"Admissions. Admission. Aren't there two sides to the word? And two opposing sides...It's what we let in, but it's also what we let out."

For years, 38-year-old Portia Nathan has avoided the past, hiding behind her busy (and sometimes punishing) career as a Princeton University admissions officer and her dependable domestic life. Her reluctance to confront the truth is suddenly overwhelmed by the resurfacing of a life-altering decision, and Portia is faced with an extraordinary test. Just as thousands of the nation's brightest students await her decision regarding their academic admission, so too must Portia decide whether to make her own ultimate admission.

Admission is at once a fascinating look at the complex college admissions process and an emotional examination of what happens when the secrets of the past return and shake a woman's life to its core.