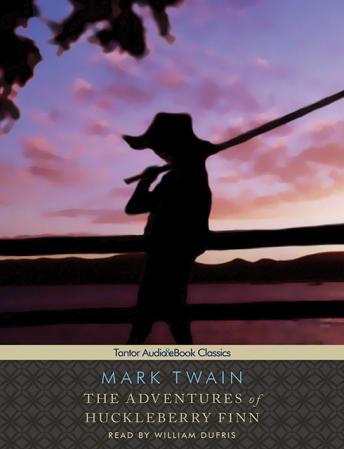 The Adventures of Huckleberry Finn

Download or Stream instantly more than 55,000 audiobooks.
Listen to "The Adventures of Huckleberry Finn" on your iOS and Android device.

Huckleberry Finn, rebel against school and church, casual inheritor of gold treasure, rafter of the Mississippi, and savior of Jim the runaway slave, is the archetypal American maverick.

Fleeing the respectable society that wants to 'sivilize' him, Huck Finn shoves off with Jim on a rhapsodic raft journey down the Mississippi River. The two bind themselves to one another, becoming intimate friends and agreeing 'there warn't no home like a raft, after all. Other places do seem so cramped up and smothery, but a raft don't. You feel mighty free and easy and comfortable on a raft.'

As Huck learns about love, responsibility, and morality, the trip becomes a metaphoric voyage through his own soul, culminating in the glorious moment when he decides to 'go to hell' rather than return Jim to slavery.

Mark Twain defined classic as 'a book which people praise and don't read'; The Adventures of Huckleberry Finn is a happy exception to his own rule. Twain's mastery of dialect, coupled with his famous wit, has made Huckleberry Finn one of the most loved and distinctly American classics ever written.