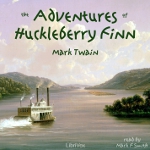 The Adventures of Huckleberry Finn

Download or Stream instantly more than 55,000 audiobooks.
Listen to "The Adventures of Huckleberry Finn" on your iOS and Android device.

In The Adventures of Huckleberry Finn, Mark Twain creates an entertaining adventure of Middle America in the 1800's - afloat on a raft on the Mississippi River. Huck escapes his civilized life when he arranges his own "murder" and turns back into the backwoods, downriver yokel he started as, and in the process springing a slave, Jim, from bondage.

Huck and Jim experience life as a series of tableaus as the river sweeps them through small towns on their way South. At each stop, Huck engages his talent for mixing fact with bald-faced lies to endlessly get himself out of situations... and of course, putting him into others!

Much has been written about the statement Twain is making about slavery in this book, but it's really secondary to the story. The facts of how black people were treated in this period give Huck and Jim their license for life on the run. Modern listeners will be intrigued by the unencumbered life of the pair; they make do with coffee, fish from the river, and little else (but of course, when they do need something extra, they don't mind helping themselves to it without recourse to money!)

Huck and Jim have run-ins with desperados and family feuds and even manage to get run down by a steamboat. The adventures ratchet up when they are joined on the raft by a self-proclaimed "duke" and a "king" - shysters both, who spend their time in figuring how to fleece the public in the little river towns. And when Jim is captured and threatened with being sent back into slavery, Huck enlists his old buddy Tom Sawyer in a frenzied, desperate, and terribly funny rescue.

I had to clip a lot of laughing from this recording at Twain's sly, catch-'em-when-they're-not-looking humor, but you can feel free to enjoy some good belly laughs at this crew of lovable rapscallions!