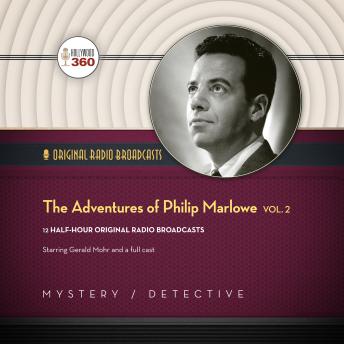 The Adventures of Philip Marlowe, Vol. 2

Download or Stream instantly more than 55,000 audiobooks.
Listen to "The Adventures of Philip Marlowe, Vol. 2" on your iOS and Android device.

Raymond Chandler's celebrated hard-boiled private eye, Philip Marlowe, made his radio debut in 1945 on the Lux Radio Theatre with "Murder, My Sweet," starring Dick Powell. Two years later, NBC brought the character to the air in his own weekly series starring Van Heflin, The New Adventures of Philip Marlowe. A summer replacement for The Bob Hope Show, the series was short-lived, ending September 9, 1947. CBS revived it in 1948 with The Adventures of Philip Marlowe, starring Gerald Mohr. With producer/director Norman MacDonnell at the helm, the series captured the largest audience in radio by 1949. Scripts were by Gene Levitt, Robert Mitchell, Mel Dinelli, and Kathleen Hite. While Chandler's distinctive similes were largely lacking, the strong, dry, sarcastic narration was there, and the way Mohr delivered his lines made you forget they weren't written by Chandler. Supporting Mohr were radio's best, including Howard McNear, Parley Baer, Lawrence Dobkin, Virginia Gregg, and Lou Krugman. One of the best detective shows on the air at the time, it lasted until 1951.

Episodes include "The Eager Witness," "The Bum's Rush," "The High-Collared Cape," "The Sea Horse Jockey," "The Hiding Place," "The Cloak of Kamehameha," "The Fox's Tail," "The Bedside Manners," "The Uneasy Head," "The Face to Forget," "The Gold Cobra," and "The Last Wish."