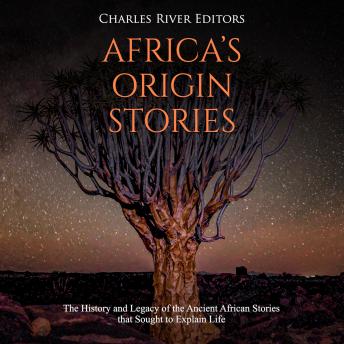 Africa’s Origin Stories: The History and Legacy of the Ancient African Stories that Sought to Explain Life

Download or Stream instantly more than 55,000 audiobooks.
Listen to "Africa’s Origin Stories: The History and Legacy of the Ancient African Stories that Sought to Explain Life" on your iOS and Android device.

By the dawn of the 17th century, Portuguese influence in Africa fell into decline, and the occasions of European contact with Ethiopia became very few and far between. It would be another three centuries before another European would venture into the holy precincts of Lalibela as part of a British military expedition mounted in 1867. Thus, the “rediscovery” of the remarkable churches and the story of Christianity in Ethiopia would only be recently written.

It is also true that the Catholic spiritual hierarchy reflected the structure of African spiritual life. The first line of African worship is composed of the spirits of passed ancestors whose relationship with the living remains direct and active. This overlapped with the idea of a host of saints endowed with specific functions and responsibilities. At a higher level, the more remote ancestral spirits, those of more than three or four generations past who have merged into the overall spirit of the nation, formed a less definable but powerful presence in day to day life. These spirits easily translate to angels, while the almighty creator, too vast and remote to be understood, conforms to the notion of the one God. The embrace of Christianity and Islam, even today, is not necessarily to the exclusion of ancestral spirits, nor the essentials of witchcraft and sorcery. The precarious security of albino people in east and central Africa, whose body parts are sought after in traditional “medicine,” is testimony to the fact that these superstitions are alive and well throughout Africa.