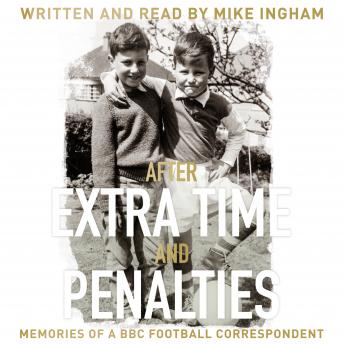 After Extra Time and Penalties: Memories of a BBC Football Correspondent

Download or Stream instantly more than 55,000 audiobooks.
Listen to "After Extra Time and Penalties: Memories of a BBC Football Correspondent" on your iOS and Android device.

After almost a quarter-century as the BBC's Chief Football Correspondent, Mike Ingham MBE shares a candid, comprehensive and sometimes controversial account of how the world of broadcasting and football changed beyond recognition throughout his career.

His broadcasting experiences saw him attend eight World Cups, commentate on twenty-eight F.A. Cup Finals, work with ten full-time England managers, introduce Sports Report, present his own music show on BBC Radio 1, and he even covered Princess Diana's funeral. He has enjoyed working with a who's who of personalities from the world of football and has tales to tell about all of them…

With never-before-heard material from Brian Clough, this audiobook is a timely reminder of England's campaigns in tournaments over the last half-century with a detailed and eyewitness account of what the atmosphere was really like over the years behind the scenes in the England camp.