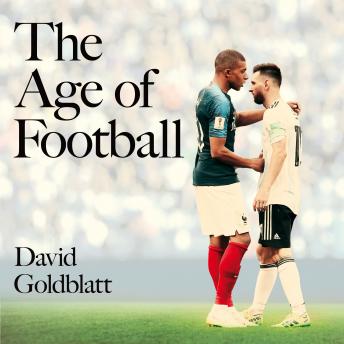 The Age of Football: The Global Game in the Twenty-first Century

Download or Stream instantly more than 55,000 audiobooks.
Listen to "The Age of Football: The Global Game in the Twenty-first Century" on your iOS and Android device.

'Magnificent . . . Goldblatt is the doyen of sports historians and brings to this account his forensic and telling eye for detail'
Mail on Sunday

The epic exploration of society, politics, and economics in the twenty-first century through the prism of football, by the critically acclaimed author of The Ball is Round.
'David Goldblatt is not merely the best football historian writing today, he is possibly the best there has ever been'
Dominic Sandbrook, Sunday Times
In the twenty-first century football is first. First among sports themselves, but it now commands the allegiance, interest and engagement of more people in more places than any other phenomenon. In the three most populous nations on the earth - China, India and the United States where just twenty years ago football existed on the periphery of society - it has now arrived for good. Nations, peoples and neighbourhoods across the globe imagine and invent themselves through playing and following the game.
In The Age of Football, David Goldblatt charts football's global cultural ascent, its economic transformation and deep politicisation, taking in prison football in Uganda and amputee football in Angola, the role of football fans in the Arab Spring, the footballing presidencies of Bolivia's Evo Morales and Turkey's Recep Erdogan, China's declared intention to both host and win the World Cup by 2050, and the FIFA corruption scandal.
Following the intersection of the game with money, power and identity, like no previous sports historian, Goldblatt's sweeping story is remarkable in its scope, breathtaking in its depth of knowledge, and is a brilliantly original perspective of the twenty-first century. It is the account of how football has come to define every facet of our social, economic and cultural lives and at what cost, shaping who we think we are and who we want to be.