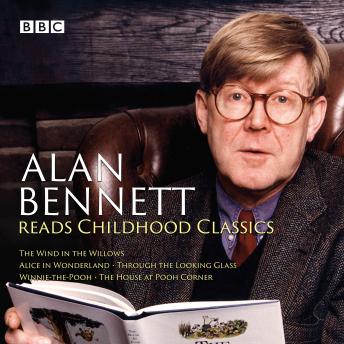 Alan Bennett Reads Childhood Classics: The Wind in the Willows; Alice in Wonderland; Through the Looking Glass; Winnie-the-Pooh; The House at Pooh Corner

Download or Stream instantly more than 55,000 audiobooks.
Listen to "Alan Bennett Reads Childhood Classics: The Wind in the Willows; Alice in Wonderland; Through the Looking Glass; Winnie-the-Pooh; The House at Pooh Corner" on your iOS and Android device.

Lewis Carroll, A. A. Milne

Alan Bennett’s distinctive readings of these cherished children’s stories have become classics in their own right. Portraying each character in his own inimitable fashion, his delightfully expressive voice perfectly conveys the sparkling humour, charm and magic of these timeless tales.

The Wind in the Willows tells the classic story of Ratty, Mole, Badger and Toad (of Toad Hall) and their waterside adventures.

Alice in Wonderland sees Alice following a white rabbit down a hole and embarking on a series of adventures with some of the most weird and wonderful characters ever encountered.

Through the Looking Glass continues Alice’s adventures, as she sees another world in the looking glass and wishes she could go there.

In a selection of stories from Winnie-the-Pooh, Pooh goes visiting and gets into a tight place, Eeyore loses a tail, Piglet meets a Heffalump, Eeyore has a birthday, and an ‘expotition’ to the North Pole is mounted.

The House at Pooh Corner finds Pooh and Piglet building a house for Eeyore, whilst Tigger comes to the forest and has breakfast. Piglet nearly meets the Heffalump again, Pooh invents a new game, and Owl moves house.