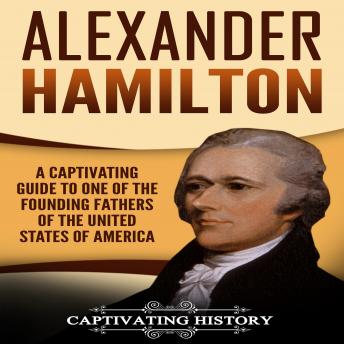 Alexander Hamilton: A Captivating Guide to One of the Founding Fathers of the United States of America

Download or Stream instantly more than 55,000 audiobooks.
Listen to "Alexander Hamilton: A Captivating Guide to One of the Founding Fathers of the United States of America" on your iOS and Android device.

Explore the fascinating life of Alexander Hamilton!
Alexander Hamilton is one of the most extraordinary figures in American history. A deep thinker, a military leader, and a political dynamo, he was George Washington's right-hand man and perhaps the most important figure in the shaping of the Constitution. His policies and practices in government set the United States down a path of commercial wealth and economic stability. His ideas still resonate in the powerful nation he helped create.
During his time, Hamilton was a divisive figure. A political extremist who antagonized the conservative parts of the new republic while protecting its former opponents. The man at the heart of the nation's first major sex scandal. A political operator whose actions outraged opponents and eventually led to the duel that cost him his life.
It was an extraordinary life, made more extraordinary by Hamilton's origins. He was an outsider, an immigrant from the Caribbean who arrived in New York to make a new life for himself. In doing so, he helped to shape the framework of politics and commerce in America. In retrospect, the amazing thing about his fame is not its recent resurgence, but that it took so long for him to be widely recognized.
This audiobook tells the story of Alexander Hamilton. The story of a nation born in blood, in struggle, and in the dynamism that immigrants could bring.
This audioook includes captivating stories and facts about Alexander Hamilton's:
Caribbean childhoodEducation and quest for finding workMilitary careerFirst steps in politicsPart in the 1796 election campaignTime in public officeLife after the treasuryAffair with Maria ReynoldsListen to this audiobook now to learn more about Alexander Hamilton!