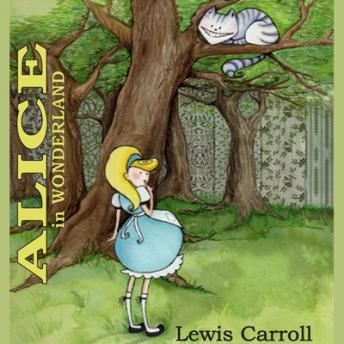 Lewis Carroll's classic Alice in Wonderland, a young girl's adventure down a magical rabbit hole, read by a full cast for Alcazar Audioworks.

On a boring afternoon, Alice spots a chance for adventure when a White Rabbit wearing a coat and pocket watch dashes by her, complaining about the time. After chasing the White Rabbit down into his rabbit hole, Alice encounters an entertaining series of eccentric characters including, The Mad Hatter, The Cheshire Cat, Humpty-Dumpty and The Queen of Hearts. Join Alice as she changes sizes quite indiscriminately, has a madcap tea with an outrageous menagerie and plays croquet with truly cranky royalty.

Table of Contents:
Chapter 1 - Down the Rabbit-Hole
Chapter 2 - The Pool of Tears
Chapter 3 - A Caucus-Race and a Long Tale
Chapter 4 - The Rabbit Sends in a Little Bill
Chapter 5 - Advice from a Caterpillar
Chapter 6 - Pig and Pepper
Chapter 7 - A Mad Tea-Party
Chapter 8 - The Queen's Croquet-Ground
Chapter 9 - The Mock Turtle's Story
Chapter 10 - The Lobster Quadrille
Chapter 11 - Who Stole the Tarts?
Chapter 12 - Alice's Evidence

Charles Dodgson was a brilliant and accomplished man. He was a mathematics teacher at Oxford for most of his career. He published several mathematics books as well as novels and poems. Dodgson was also a professional photographer and avid inventor.
"