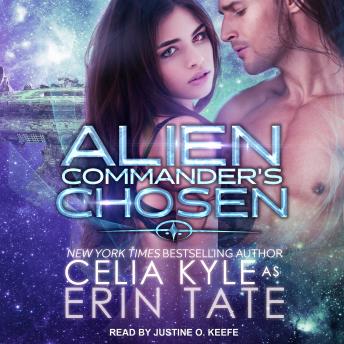 Download or Stream instantly more than 55,000 audiobooks.
Listen to "Alien Commander's Chosen" on your iOS and Android device.

What does a too-nosy secretary have in common with an alien? Nothing. Until she's turned into an alien, too. And then, well, there's everything.

Joyce's life is mapped out: dead end job, after dead end job, until she is dead. At least, that is until Kede Tria-a Doshan alien-shows up and takes her away from it all. Literally. He's overbearing, possessive, sexy as hell, and everything she never knew she wanted in a man, er, alien.

Of course, life happens and she discovers Death by Chocolate isn't just a dessert, it's a reality. Good thing Kede is there to save her . . . by making her Doshan.

Kede Tria is the Holder of House Tria, commander of the starship Vehly, and one of the most feared Doshan warriors. He's also Joyce's life mate-her harau. His curvy, deliciously lush mate just doesn't know it yet. She was human and now she is Doshan, but through it all she remains one thing: his.

Kede will fight for what belongs to him. So, while others are intent on ending her life, they do not realize he will gladly end theirs.