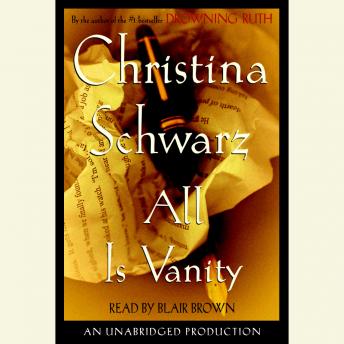 All is Vanity: A Novel

Download or Stream instantly more than 55,000 audiobooks.
Listen to "All is Vanity: A Novel" on your iOS and Android device.

In All is Vanity, Margaret and Letty, best friends since childhood and now living on opposite coasts, reach their mid-thirties and begin to chafe at their sense that they are not where they ought to be in life. Margaret, driven and overconfident, decides the best way to rectify this is to quit her job and whip out a literary tour de force. Frustrated almost immediately and humiliated at every turn, Margaret turns to Letty for support. But as Letty, a stay-at-home mother of four, begins to feel pressured to make a good showing in the upper-middle-class Los Angeles society into which her husband’s new job has thrust her, Margaret sees a plot unfolding that’s better than anything she could make up. Desperate to finish her book and against her better nature, she pushes Letty to take greater and greater risks, and secretly steals her friend’s stories as fast as she can live them. Hungry for the world’s regard, Margaret rashly sacrifices one of the things most precious to her, until the novel’s suspenseful conclusion shows her the terrible consequences of her betrayal.

Widely celebrated for her debut novel, Drowning Ruth, Christina Schwarz once again proves herself to be a writer of remarkable depth and range. Like Drowning Ruth, All is Vanity probes into the mysteries of the human heart and uncovers the passions that drive ordinary people to break the rules in pursuit of their own desires.