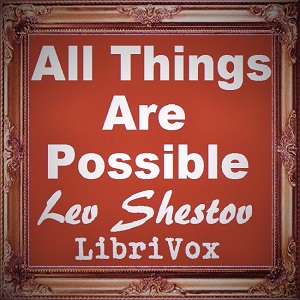 All Things Are Possible

Download or Stream instantly more than 55,000 audiobooks.
Listen to "All Things Are Possible" on your iOS and Android device.

A passionate exponent of Russian Existentialism, Lev Shestov is little known in the English-speaking world but had an extensive influence on philosophy and literature in the first half of the 20th century, his influence imprinting thinkers and writers as diverse as D. H. Lawrence, Nicholas Berdyaev, Georges Bataille, and Edmund Husserl. Driven out of Russia by the Bolshevik Revolution, Shestov continued to live, study, and write in Paris, where he died in 1955. - Summary by Expatriate