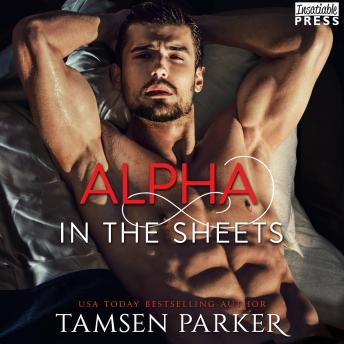 Alpha in the Sheets: After Hours, Book One

Download or Stream instantly more than 55,000 audiobooks.
Listen to "Alpha in the Sheets: After Hours, Book One" on your iOS and Android device.

Powerhouse consultant India Burke is notorious for her razor-sharp mind, her incisive tongue, and for always being in control. But during her “lost weekends”—out-of-town, one-and-done, anonymous rendezvous solely for the purpose of kinky sex—she craves a submissive role. Cris Ardmore, India’s latest tryst, is a Dominant who calls an isolated Hawaiian paradise home. India’s expecting forty-eight hours of contractually defined sex, but instead of serving as just another BDSM Band-Aid, Cris wants to know the real India Burke. Despite her aversion to anything approaching intimacy, India is hooked by their incredible sexual chemistry. With tension ratcheting up in her professional life, India needs the release Cris offers more than ever, but her repeated visits come with their own risks. No matter how strong their attraction, India is determined to maintain her boundaries in order to keep her life whole after her first love blew it apart. She must choose between taking a chance and handing Cris the road map to her heart or locking down her borders before he does any more damage. “Tamsen Parker has created a fictional world that is both dark and joyful, in which an intense, complicated, submissive heroine meets a tender, lighthearted, dominant hero. The psychological dynamics are phenomenal, and the lush Hawaiian backdrop provides a magical sexual world in which to explore them. A stunning debut.” USA Today Bestselling Author Megan Mulry “A smart, strong, brazen debut. Parker doesn’t strip the rose of its thorns.” Bestselling Author Cara McKenna “[Alpha in the Sheets]... is a story that works on all levels, drawing you in with snappy pacing and dialogue, building a slow burn until you can’t put it down. Parker has a confident, clear voice, and the pacing and conflict are fantastic. Cris and India’s partnership is one of the most real I’ve read in a very long time.” Bestselling Author Anne Calhoun **Please note: Previously published as Personal Geography. This is NOT a stand-alone.