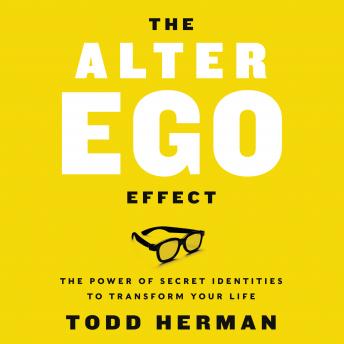 The Alter Ego Effect: The Power of Secret Identities to Transform Your Life

Download or Stream instantly more than 55,000 audiobooks.
Listen to "The Alter Ego Effect: The Power of Secret Identities to Transform Your Life" on your iOS and Android device.

A top performance expert reveals the secret behind many top athletes and executives: creating a heroic alter ego to activate when the chips are down.

There’s only one person in the way of you untapping your potential: You. There’s also one person who can move you out of the way so you can perform at your peak.

That person is already inside you. You just need to unlock them. This other part of you is your Alter Ego. After twenty-one years of working with elite athletes, performers and leaders, Todd Herman has discovered how you can use your alter ego to achieve the seemingly impossible. It all clicked for Todd when he met Bo Jackson.

When Herman met Bo Jackson, the professional athlete told him, “Bo Jackson never played a down of football in his entire life.” Bo explained that when he was young, he’d get into trouble because chaos caused by his anger issues. Then, he saw Friday the 13th and became fascinated by the cold, calculating nature of Jason Vorhees. In that moment, he resolved to stop being Bo Jackson, and start being Jason the moment he stepped on the field.

In this transformative guide, Herman teaches you how to create and control an Alter Ego like Bo—and the thousands of other athletes, business leaders, entrepreneurs, and entertainers who have used this simple tool to change their lives. Herman also shares his own story: he knew that inside was a confident, self-assured, intelligent person who could help others get better results in their lives. When he started using superman’s classic trick—putting on a pair of glasses—he learned to trigger the specific traits he needed to achieve his goals.

The Alter Ego Effect is not about creating a false mask—it’s about finding the hero already inside you. It’s a proven way of overcoming the self-doubt, negativity, and insecurity that hold you back, and empowering you to ultimately become your best self.