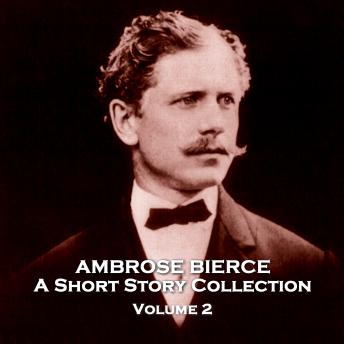 Download or Stream instantly more than 55,000 audiobooks.
Listen to "Ambrose Bierce - A Short Story Collection - Volume 2 - A Horseman in the Sky & Other Stories" on your iOS and Android device.

Ambrose Gwinnett Bierce was born on 24th June 1842 at Horse Cave Creek in Meigs County, Ohio. His parents were poor but they introduced him to literature at an early age, instilling in him a deep appreciation of books, the written word and the elegance of language. Growing up in Koscuisko County, Indiana poverty and religion were defining features of his childhood, and he would later describe his parents as "unwashed savages" and fanatically religious, showing him little affection but always quick to punish. He came to resent religion, and his introduction to literature appears to be their only positive effect.At age 15 Bierce left home to become a printer's devil, mixing ink and fetching type at The Northern Indian, a small Ohio paper. Falsely accused of theft he returned to his farm and spent time sending out work in the hopes of being published.His Uncle Lucius advised he be sent to the Kentucky Military Institute. A year later he was commissioned as an Officer. As the Civil War started Bierce enlisted in the 9th Indiana Infantry Regiment. In April 1862 Bierce fought at the Battle of Shiloh, an experience which, though terrifying, became the source of several short stories. Two years later he sustained a serious head wound and was off duty for several months. He was discharged in early 1865. A later expedition to inspect military outposts across the Great Plains took him all the way to San Francisco. He remained there to become involved with publishing and editing and to marry, Mary Ellen on Christmas Day 1871. They had a child, Day, the following year. In 1872 the family moved to England for 3 years where he wrote for Fun magazine. His son, Leigh, was born, and first book, 'The Fiend's Delight', was published.They returned to San Francisco and to work for a number of papers where he gained admiration for his crime reporting. In 1887 he began a column at the William Randolph Hearst's San Francisco Examiner. Bierce's marriage fell apart when he discovered compromising letters to his wife from a secret admirer. The following year, 1889 his son Day committed suicide, depressed by romantic rejection.In 1891 Bierce wrote and published the collection of 26 short stories which included 'An Occurrence at Owl Creek Bridge'. Success and further works including poetry followed. Bierce with Hearst's resources helped uncover a financial plot by a railroad to turn 130 million dollars of loans into a handout. Confronted by the railroad and asked to name his price Bierce answered "my price is $130 million dollars. If, when you are ready to pay, I happen to be out of town, you may hand it over to my friend, the Treasurer of the United States". He now began his first foray as a fabulist, publishing 'Fantastic Fables' in 1899. But tragedy again struck two years later when his second son Leigh died of pneumonia relating to his alcoholism.He continued to write short stories and poetry and also published 'The Devil's Dictionary'. At the age of 71, in 1913 Bierce departed from Washington, D.C., for a tour of the battlefields where he had fought during the civil war. At the city of Chihuahua he wrote his last known communication, a letter to a friend. It's closing words were "as to me, I leave here tomorrow for an unknown destination," Ambrose Bierce then vanished without trace. p>1 - Ambrose Bierce - An Introduction2 - A Horseman in the Sky by Ambrose Bierce3 - The Middle Toe of the Right Foot by Ambrose Bierce4 - John Mortonson's Funeral by Ambrose Bierce5 - Revenge by Ambrose Bierce6 - The Boarded Window by Ambrose Bierce7 - One Summer Night by Ambrose Bierce8 - The Story of a Conscience by Ambrose Bierce9 - The Affair At Coulter's Creek by Ambrose Bierce10 - Chickamauga by Ambrose Bierce