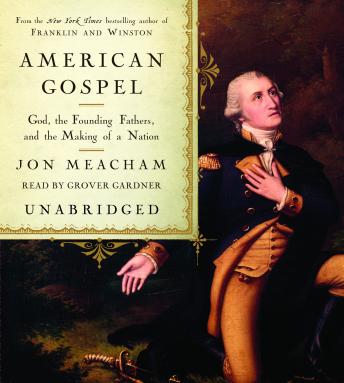 American Gospel: God, the Founding Fathers, and the Making of a Nation

Download or Stream instantly more than 55,000 audiobooks.
Listen to "American Gospel: God, the Founding Fathers, and the Making of a Nation" on your iOS and Android device.

In American Gospel (literally meaning the "good news about America"), New York Times bestselling author Jon Meacham sets the record straight on the history of religion in American public life. As Meacham shows, faith --meaning a belief in a higher power, and the sense that we are God's chosen people-- has always been at the heart of our national experience, from Jamestown to the Constitutional Convention to the Civil Rights Movement to September 11th. And yet, first and foremost, America is a nation founded upon the principles of liberty and freedom. Every American is free to exercise his own faith or no faith at all. And so a balance is struck, between public religion and private religion; and religious belief is distinct from morality. As Meacham explains, the well-known "wall" between church and state has always separated private religion from the business of the state, yet religious belief is part of the basic foundation of government. Brilliantly articulating an argument that links the Founding Fathers to an insightful contemporary point of view, American Gospel renews our understanding of history, and what public religion has meant in America, so that we can move beyond today's religious and political extremism toward a truer understanding of the place of faith in American society.