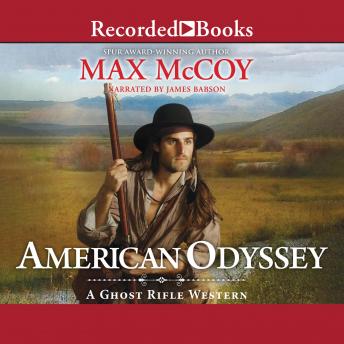 Download or Stream instantly more than 55,000 audiobooks.
Listen to "American Odyssey" on your iOS and Android device.

Max McCoy, the Spur Award-winning author of Damnation Road, continues his American Western saga of the Ghost Rifle as the violence and bloodshed the weapon has caused return to haunt the man who created it …

THE WEAPON AND THE WILDERNESS
Ten years have passed since Jack Picaro lost his Ghost Rifle—the firearm he invented, the one that never missed its target. The loss of the rifle calmed the hellraiser in his soul. Instead of returning to the gambling halls and whiskey bars
of St. Louis, Jack has spent the last decade as a fur trapper in Wyoming’s Wild River Range, married to Sky, the daughter of an Arikara war chief.

Then, after helping rescue U.S. soldiers captured by Crow Indians in the Rocky Mountains, Jack hears the familiar bell-like report of his Ghost Rifle. Determined to retrieve his deadly property, he travels deep into Lakota territory, facing down
old enemies—and resuming old sinful habits—unaware of what awaits him when he eventually returns home to his family.