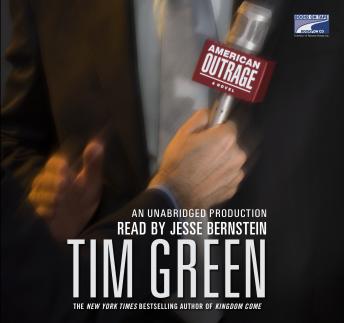 Download or Stream instantly more than 55,000 audiobooks.
Listen to "American Outrage" on your iOS and Android device.

“Tim Green is a master.”–Nelson DeMille

Jake Carlson, a correspondent for the TV news show American Outrage, inhabits a world of sensational trials and crazed celebrities. One of the nation’s top television journalists, he’s used to dragging himself through the dirt to get to the truth. When his adopted son, Sam, asks him to use his muckraking talents to find his birth mother, Jake is stunned by the ugly secrets he unearths: an international crime syndicate, a horrifying child trafficking ring, and a corrupt politician, the patriarch of an old New York financial dynasty.

Initially galvanized by a career-making exclusive, Jake–and his son–are soon the victims of brutal violence and the targets of Jake’s fellow reporters, who dog them for their story. Concerned for the survival of his family, Jake realizes some sins of the past should never be uncovered....

Filled with an insider’s knowledge of tabloid news and the experience of an adopted son seeking his biological parents, AMERICAN OUTRAGE proves to be Tim Green’s best, most personal thriller yet.