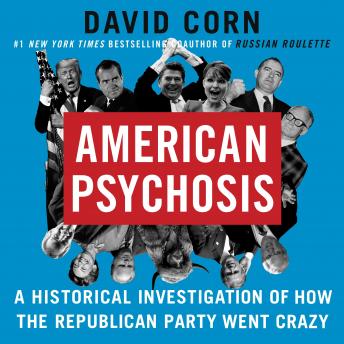 American Psychosis: A Historical Investigation of How the Republican Party Went Crazy

Download or Stream instantly more than 55,000 audiobooks.
Listen to "American Psychosis: A Historical Investigation of How the Republican Party Went Crazy" on your iOS and Android device.

"[Corn is] a great journalist. I love the way he thinks. I love the way he writes. I'm so glad he's done a super-readable, modern history of the right...We just need smart, digestible history about this stuff right now...[AMERICAN PSYCHOSIS] is perfectly timed...Relevant history for where we are right now." —Rachel Maddow, host, The Rachel Maddow Show

"With AMERICAN PSYCHOSIS, David Corn 'did the full homework to take us all the way back to where it really begins.’" —Lawrence O'Donnell, host, The Last Word

A fast-paced, rollicking, behind-the-scenes account of how the GOP since the 1950s has encouraged and exploited extremism, bigotry, and paranoia to gain power, AMERICAN PSYCHOSIS offers readers a brisk, can-you-believe-it journey through the netherworld of far-right irrationality and the Republican Party’s interactions with the darkest forces in America. In a compelling and thoroughly-researched narrative, Corn reveals the hidden history of how the Party of Lincoln forged alliances with extremists, kooks, racists, and conspiracy-mongers and fostered fear, anger, and resentment to win elections—and how this led to Donald Trump’s triumph and the transformation of the GOP into a Trump personality cult that foments and bolsters the crazy and dangerous excesses of the right.

The Trump-incited insurrectionist attack on the US Capitol on January 6, 2021, was no aberration. AMERICAN PSYCHOSIS shows it was a continuation of the long and deep-rooted Republican practice of boosting and weaponizing the rage and derangement of the right.

The gripping tale in AMERICAN PSYCHOSIS covers the last seven decades. From McCarthyism to the John Birch Society to segregationists to the New Right to the religious right to Rush Limbaugh to Newt Gingrich to the militia movement to Fox News to Sarah Palin to the Tea Party to Trumpism, the Republican Party has deliberately nurtured and exploited rightwing fear and loathing fueled by paranoia, grievance, and tribalism. This powerful and important account explains how one political party has harnessed the worst elements in politics to poison the nation’s discourse and threaten American democracy.