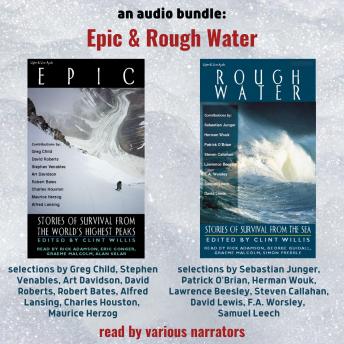 Download or Stream instantly more than 55,000 audiobooks.
Listen to "An Audio Bundle: Epic & Rough Water" on your iOS and Android device.

· Publishers Weekly 'Listen Up' Award Winner · ForeWord Magazine's 'Audiobook of the Year' Winner · AFIM Indie Award Winner · Independent Publisher Magazine’s ‘IPPY Award’ Finalist. Epic--a mountaineering term that evokes a sense of treacherous disaster. The climb that went wrong: fighting blinding snowstorms and horrific avalanches; days spent tentbound running low on food, water and oxygen; surviving broken bones and shattered spirits. With writing from Greg Child, David Roberts, Stephen Venables, Alfred Lansing and others, Epic is a collection of the most memorable accounts of legend-making expeditions to the world’s most famous peaks, often in the worst possible conditions! In Rough Water, hear the stories of men and women battling the elements, and sometimes each other, to stay alive, confronting savage storms, rogue waves, icebergs, sharks, starvation and their own fear and suffering. From Sebastian Junger’s The Whale Hunter to Herman Wouk’s The Caine Mutiny to Lawrence Beesley’s The Loss of The S.S. Titanic, Rough Water is a unique collection of the finest writing on why men and women go to sea, and what they find there!