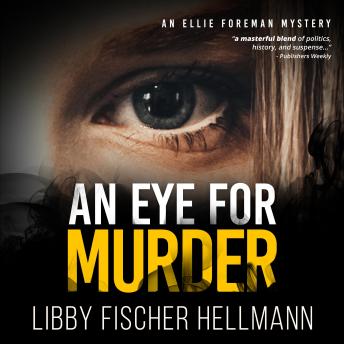 An Eye For Murder: An Ellie Foreman Mystery

Download or Stream instantly more than 55,000 audiobooks.
Listen to "An Eye For Murder: An Ellie Foreman Mystery" on your iOS and Android device.

August, 1944, Prague is where the story begins with a seemingly casual exchange. Decades later, in contemporary Chicago, TV documentary filmmaker Ellie Foreman gets a letter prompted by the success of her show 'Celebrate Chicago.' One viewer was the elderly Ben Sinclair. When he suddenly dies, his landlady Mrs. Fleischman finds Ellie's name among his effects and writes to her. Ellie agrees to help dispose of Ben Sinclair's possessions. She became a filmmaker to help people tell their stories. All too soon, Mrs. Fleischman dies, too. Then Ben's things are stolen from Ellie's suburban home. The single mom, working to move past her ex, is producing a campaign video for a steel magnate running for a seat in the Illinois Senate. Despite these distractions, Ellie stays focused on her link to the dead man and turns to her father, a retired lawyer with deep roots in Chicago's Jewish community, for insights into the mystery of Ben Sinclair. From the political present of the North Shore to the buried memories of the city's ethnic neighborhoods, the components of Ben's story eventually merge into an explosive climax.

A masterful blend of politics, history, and suspense, this novel is well worth reading… sharp humor and vivid language… Ellie is an engaging amateur sleuth. Publishers Weekly

Complicated… fascinating… Hellmann has a beautifully tuned ear… which makes many of her scenes seriously funny. Dick Adler, Chicago Tribune